One day I was out fishing with old Alastair. I would rather hear Alastair tell stories than if you would give me the nicest book you ever read. We were fishing and he said, this day, ‘Ah, he said, if there is no fish there’ll be a story anyway’...He turned to me and said, ‘Do you believe in ghosts?’

‘I don’t put a lot of faith in them myself,’ said Alastair, ‘But I cannot say, lad, but that I did not see one ghost and I will tell you about it. I was ceilidhing in the house of Donald Alastair and he was the son of the tailor who used to be in the place. He lived about a mile and a half from Fionnphort. It was a good ceilidh house at that time. But we were there, eight of us inside and I was not on my own. I wasn’t the only one who saw a ghost, everyone inside saw it.

It was snowing and drifting snow...the snow had begun after we reached the house but it was bitter cold outside. There was a lamp...where the tailor was sewing...and a gust of cold wind came in as someone opened the door, one of two doors and the light went out. And this man came in – a man with a black beard and his face so white, as white as linen.

He stood on the floor and the woman of the house said to him, “Come forward lad, you are so wet.” Now we knew that it was snowing but there was no sign of snow on him at all, but water was pouring off him. Water coming off him in rivers. He didn’t come any nearer but he said: “Oh, he said, there is no snow where I am. And if you go over to Traigh Geal on Erraid you will get me there and the bandage that was on my thumb, it is just about three feet from my head.” And after saying this he left.

‘Now,’ said Alistair, ‘I saw this with my own eyes. And Peggy fainted and Anna also, they both fell down in a faint. Everyone in the house were frightened out of their wits. The snowstorm stopped about eleven o’clock and I got home, for you know I had a long road to go on foot.’

‘But in the morning...there was a good wind from the south-west. And the folk of the township heard about the ghost in the tailor’s house before I told them anything about it. And this man, Coll, and Angus...they thought about when the tide would be suitable to go over to Erraid and see if there was any truth in it. Now Erraid is only half an island, at half-tide you can go over dry-shod. The three of them set off and on Traigh Geal on Erraid they found the body of a man. And, as Alastair himself saw – as he had heard about the bandage on the thumb, it was found just where he said, three feet from the head.

A few went off to the cottages of the lighthouse keepers, who were living on the island, and when they heard what had happened they brought a barrow – a hand barrow – and everyone that could came to help.  And they took the body down to Erraid jetty and across the ford to Fidden and there they got a cart to take him to Fionnphort. And they did not know who he was...whom they should inform that they had found him...there was no telegraph at that time...they sent word to Bunessan and they spread the news. Until at last a man came from Appin and recognised his son – a John MacPherson. He was mate on a ship called the Fair Holm and it went ashore at Tory Island on the north-west side of Ireland and everyone of the crew was lost. And on the stone where I have read it many a time, it says that he came a distance of 200 miles in 19 days before landing on Erraid.’

Now I cannot doubt what Alastair told me, that he saw the ghost himself because he was a knowledgeable man – a man who sailed the world on ships when he was young and he was no fool. And when other people believe that they have seen a ghost, I believe them anyway. You will have your own opinion – but that is how it came to be that John Macpherson was buried in Fionnphort. You can see the stone there and it is the only stone in the cemetery made of slate.

(Told by Captain Dugald MacCormick, and recorded by Calum MacLean,1953)

Text on the slate stone in Fionnphort graveyard:

Erected by D Mcpherson, Appin,
in memory of his beloved son, John,
Mate of SS Fairholm,
wrecked on Tory Island 22 August 1874,
aged 35 years.
His body was washed ashore here –
a distance of 200 miles –
19 days after 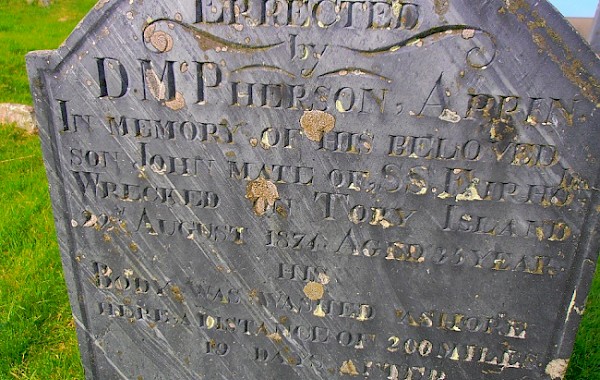 Sorry - we are temporarily closed.